In the past, Freight Management Systems (FMS) had an aging Windows-based invoicing system that required a series of manual entries from fixed devices. But as technology evolved over the years, so did the demands from their customers.

As more competitors arrived in the transportation management system (TMS) market, offering web-based solutions, the FMS team knew that their business could be in jeopardy. So when one of their largest customers asked if FMS could completely automate their invoicing process, the team saw it as an opportunity to create something more mobile and less manual.

Additionally, as Henry Sheldon, CEO of FMS realized, a web-based application would offer APIs that would allow them to open up their ecosystem:

“In the past, people expected a TMS to do everything, but now the trend is that companies have a TMS, a CRM, an accounting solution, a reporting system, and more. So although a TMS doesn’t have to do it all, it has to integrate with all of these other softwares, which is why APIs are a must-have.”

Everyone wants to get paid faster

The main purpose of a TMS is to connect shippers - those who have goods to get from one place to another - with carriers - those who have a means of moving the goods via truck, train, etc. The more shipments a carrier puts together, the more money they make, whether they own the trucks or not. In the case of FMS, there are also transportation brokerages which are non asset-based companies that need to send freight and perhaps don’t want to staff a team.

Of course, getting paid has steps to be completed: freight billing depends on brokers (FMS’s customers) receiving a Proof of Delivery from truck drivers, via either an onboard scanner or fax. The longer it takes drivers to send the PODs to the brokers, the longer it takes for the broker to get paid.

Before FMS optimized their system, their customer’s drivers had to manually scan the POD documents they received upon delivery and fax them to brokers for invoicing. The broker then faxed the information along to their own accounting office, who entered it into FMS’ application. This process could take anywhere from 2 to 7 days, depending on the trucker’s on-board equipment or proximity to a truck stop.

Wanting to create a new cloud solution to meet industry demands, the FMS team decided to focus on an application that would receive the POD from the drivers’ mobile scanners and automatically initiate the invoicing process in their software, running at the customer site.

“Our invoicing code is very complex with a lot of dependencies.
Re-engineering that code to create web services would have taken years and the costs would have made the project unfeasible.”

With Thriftly, there would be no need to rewrite any existing code. Instead, FMS would be able to create wrappers around the DataFlex code that they already in place for many years, in order to produce an API. Then all that remained was to produce the front-end code for the web.

Taking this route would allow FMS to transition, using the same databases and existing code, while building out their different modules into a web version. Then, they could get customers to use these first modules while also working to build new ones. Thriftly’s support of multiple languages would also give the FMS team the flexibility to use a more common and modern option, such as C#, to build out these new functionalities and features.

To speed up the Proof of Delivery process, FMS created a new cloud-based application running on Microsoft Azure. Then, FMS’s customer provided portable document scanners to all their drivers that would allow them to instantly scan and upload POD documents from anywhere, as long as they could connect their scanner to the internet. 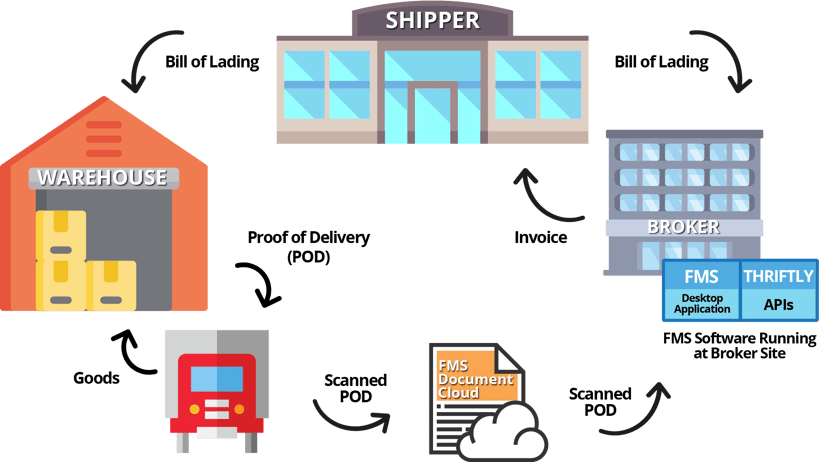 The new app works by calling Thriftly APIs running on-premise at the customer’s site, and automatically initiates the invoicing process by retrieving the driver’s scanned documents. Then, the app emails the invoice to the brokers, along with the POD. The entire invoicing process, from start to finish, now takes less than two minutes.

“Thriftly provided us with an effortless yet sophisticated way to build a web API, without changing anything in our existing codebase. That let us go to market quickly with minimal investment."

“Thriftly has allowed us to take on the big project [of modernizing], and not only does it let us use our own code, but it also lets us put API endpoints anywhere we want, with the gateway,” says Henry. He goes on to explain the projects that FMS has been able to work on, after using Thriftly to make the move to web-based:

“We’ve been able to link other softwares, even across locations, to our software. We’ve also been able to do things like integrate with an LTL software we created, and host it on two different sites. Then there was an integration where we could give tracking information from a remote office site to our servers, and then translate it into EDI for our customer.”

“Thriftly has helped us cross barriers, without reprogramming. Not only with the functionality, but also the ways of sending the data - so it’s been a time-saver as well.”

See how easy it is to get started on your API project with a free Thriftly trial: