In this, webinar, we cover React Native, an open-source, Javascript-based framework for building native mobile apps for iOS and Android devices. We will also be covering debugging and tools you can use to debug your React Native application. 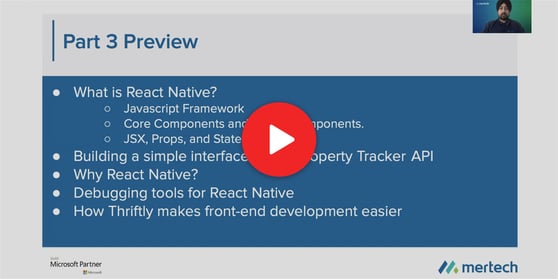 Thriftly is an API development platform, that makes the development and deployment of APIs trivially easy to accomplish. You can get an API running in any of the supported programming languages in a matter of minutes. Thriftly also handles a number of things to reduce the complexity of building a modern API such as process management, network configuration and automated deployment.

In this webinar, we show you how to build a modern mobile application using React Native and the Thrifty APIs we built in part one of our webinar series: Generating Revenue With Hybrid Cloud Applications And On-premise Data.

How to Get Started with React Native

To get started with React Native development, you will need a modern code editor (like VS Code), NodeJS and NPM installed globally, a mobile device(iOS/Android) to test on and its respective SDK installed. Because React Native is a cross platform mobile development framework you will need to install Xcode for iOS development and Android Studio for Android Development, both will come bundled with the respective platforms SDK. Through Node’s package manager (NPM), React Native and all its dependencies can be brought into your workspace. After the dependencies have been installed, you can use React Native's built-in Command Line Interface (CLI) to create your first application. The CLI can be used for many functions like running you application on a simulator or real device and building the app for production.

Resources to Help You Get Started

We're pleased to offer this webinar replay. Let us know your thoughts about hybrid cloud applications by providing your comments or reaching out to us!